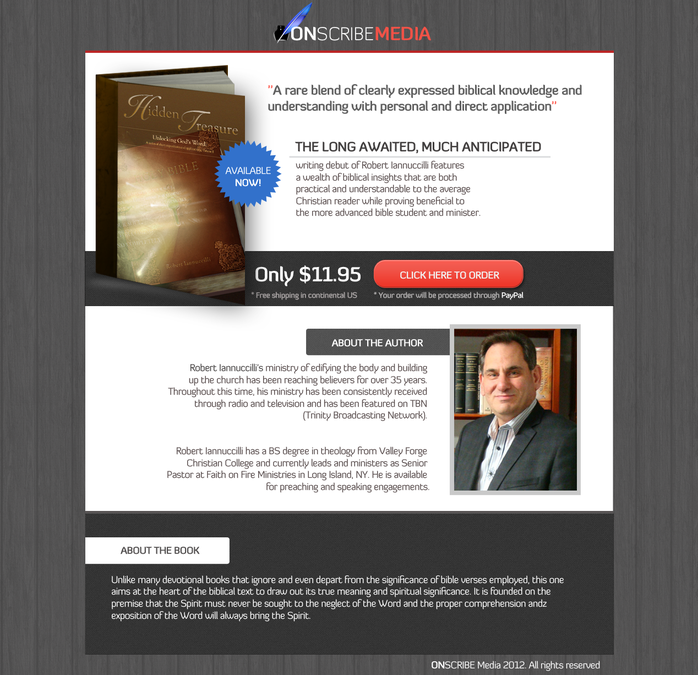 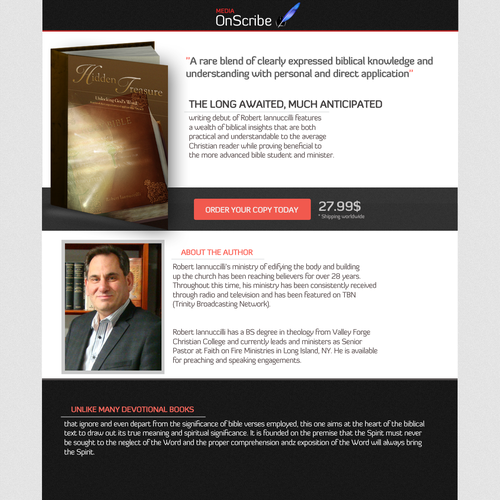 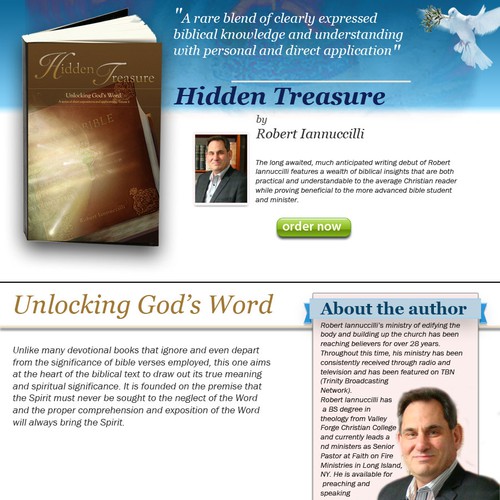 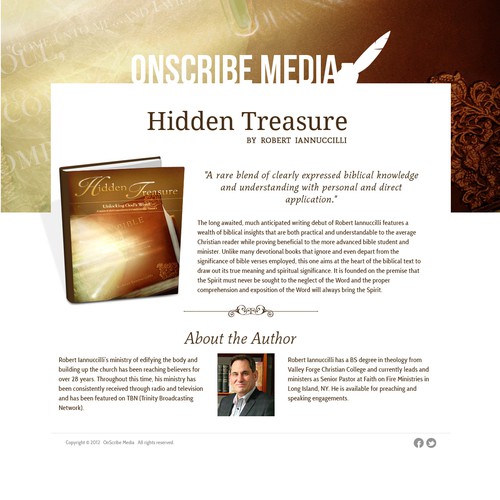 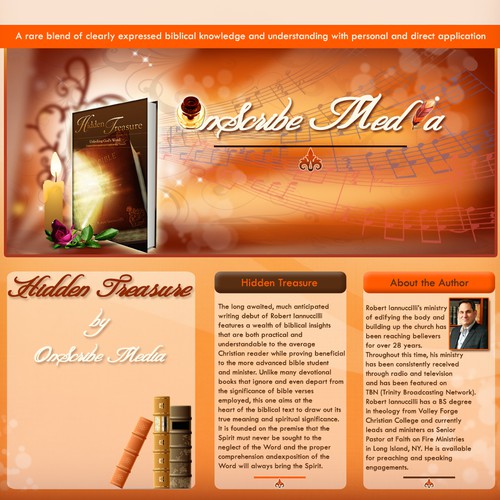 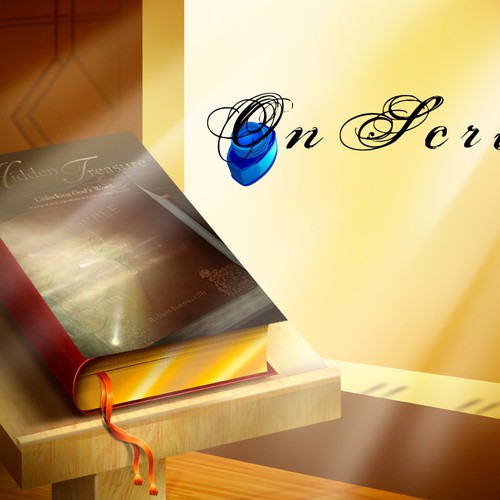 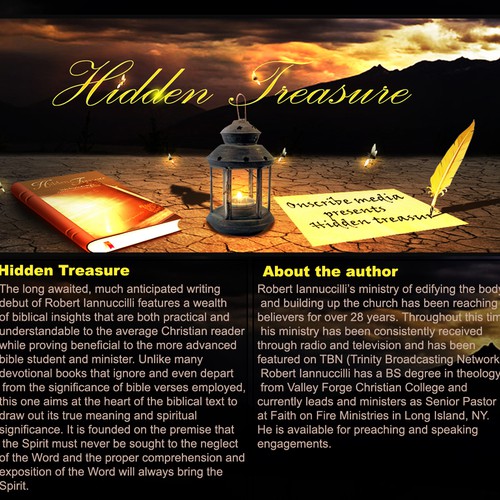 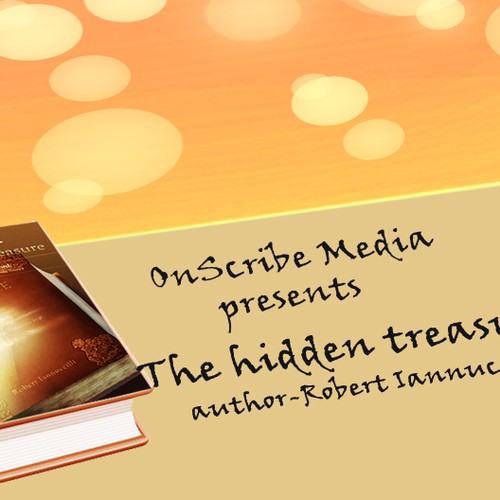 We are a non-profit, religious organization and this is a title we created to publish books under

***We are testing this process out, and if it's successful for us on here, we have 3 much larger valued designs that need to be done subsequently and we anticipate wanting to work with the same designer***

Our pastor has written his first book, entitled "Hidden Treasure" that we have self-published. We are looking for a full page ad design that would appear to be placed on the publisher's website (doesn't exist) to essentially become the representation of the website for the publishing name we are publishing under, OnScribe Media.

We are looking for a page that, again, will provide a presence and image as the publishing company's page that is highlighting the newest release of the book. The book cover is designed already and attached for use, but there is no image/design that will represent the publisher, OnScribe Media, so that will need to be included.

We are open to creative ideas as far as the publisher design, but just as a starting point or reference, we were thinking of something that would make use of a quill (feather) ink well pen, perhaps even something that represents media, but just use your creativity.

Please realize that I am not a designer, so my explanations are to give you a concept of style and direction, not to simply be copied because you think I'm saying it's exactly what I'm looking for. You guys are the designers, so do what you do best :)

So, I'm essentially looking to create a full page ad for the book, that appears to be on the publisher's page and use it as the publisher's website. In other words, OnScribe Media doesn't have a website. It also doesn't have any other books, so there really is no information to provide. But, because most people don't know every publisher out there and will never know how big or small this publisher is, it will lend some credibility to this book for it to appear like they've reached the OnScribe Media (publisher) homepage and it's simply promoting it's latest release. So, for all intents and purposes, it will be a full page ad for the book, that is placed on the publisher's "site" which can be achieved by creating a header for OnScribe Media and a simple background around the ad to make it look like it's placed on the page. For a depiction of what I mean, see the way the netflix signup page is set up. The main difference here is we would like OnScribe Media to have somewhat of a design to it as it isn't the established brand that netflix is (https://signup.netflix.com/)

As far as a good indication of the type/style of ad I'm looking for, you could see the following for reference:

Please be aware on this example that they have used part of the book cover as the background of the copy portion of the ad. One thing I know for sure is that I DO NOT want our book design used similarly. In this example, the book cover is nice and colorful and it makes for an attractive ad. Ours would be dark and ugly, so please take another route in the execution of this concept so it will be an attractive ad.

Lastly, please use the following for the content of the ad, but the layout and execution of it is open to your input. Also, feel free to take creative licensing and ad in anything in the realm of design that you think would make this an attractive/effective ad. Perhaps something that shows this is a newly released and/or author debut, these are just ideas though, come up with whatever you think looks/works best. I've attached a picture for the author along with the book cover and some examples of a quill pen.

Here is the copy to be used as you see fit:

The long awaited, much anticipated writing debut of Robert Iannuccilli features a wealth of biblical insights that are both practical and understandable to the average Christian reader while proving beneficial to the more advanced bible student and minister. Unlike many devotional books that ignore and even depart from the significance of bible verses employed, this one aims at the heart of the biblical text to draw out its true meaning and spiritual significance. It is founded on the premise that the Spirit must never be sought to the neglect of the Word and the proper comprehension and exposition of the Word will always bring the Spirit.

About the author
Robert Iannuccilli’s ministry of edifying the body and building up the church has been reaching believers for over 28 years. Throughout this time, his ministry has been consistently received through radio and television and has been featured on TBN (Trinity Broadcasting Network). Robert Iannuccilli has a BS degree in theology from Valley Forge Christian College and currently leads and ministers as Senior Pastor at Faith on Fire Ministries in Long Island, NY. He is available for preaching and speaking engagements.

**We are definitely looking for a modern look to both the publisher symbol and the page overall. We would like the ability to have them click to purchase the book.**

Please feel free to ask any questions for further clarification.

We are needing a modern redesigned logo for our growing church.
$ 899
Church
269
entries
53
Designer
Modern Church in Las Vegas in Need of New Logo
$ 299
UPDATE: We have got several logos using a palm tree or bird and would love to see any different concepts that you incred
122
entries
22
Designer
Please create a modern, yet timeless logo for our city's first new funeral home in over 60 years.
US$359
Bravo Family Mortuary provides compassionate care for the deceased and those who love them.
100
entries
24
diseñadores
Logo design for Extreme Response. We change lives and break poverty
299 $US
Extreme Response International (ER) helps vulnerable people in the world with a goal of breaking generational poverty.
55
entries
17
designer graphistes
Updated logo for a classic place of worship
$ 299
We are a traditional church serving suburban St. Louis.
39
entries
9
Designer
"The Forge" Church Logo
899 USD
We are a Church called Valley Forge with a new building called "The Forge". It has the theme of a Forge or Blacksmith S
219
entries
27
designer

Inizia subito
Design a logo for a Hmong Lutheran church congregation in California
$299
We are a Hmong Lutheran congregation belonging to the Wisconsin Evangelical Lutheran Synod (WELS). We want to create a l
65
entries
8
デザイナー数
Rebranding of church to appeal to younger families
299 $US
We are an established church that is aging but are rebranding and reprogramming to service and attract younger families.
101
entries
19
designer graphistes
Ad Campaign For Church Giving Software
79 $US
We are a donation/fundraising software company for churches and non-profits within the United States.
35
entries
10
designer graphistes
Design an inspirational logo for SHAPE Christian Fellowship
$499
SHAPE is a Christian, bible-based non-profit fellowship. We are helping people understand and develop their God-given gi
142
entries
20
デザイナー数
Young Vibrant Church where everyone is welcomed needs a new improved look!
899 US$
We are young vibrant church where everyone is welcomed. We want to attract young couples with families and single millen
622
entries
99
designers
RocketPay website banners
CA$109
RocketPay is web software that let's business owners manage payroll online.
6
entries
5
デザイナー数
Maggiori informazioni sul design di banner pubblicitario
Scopri come funziona