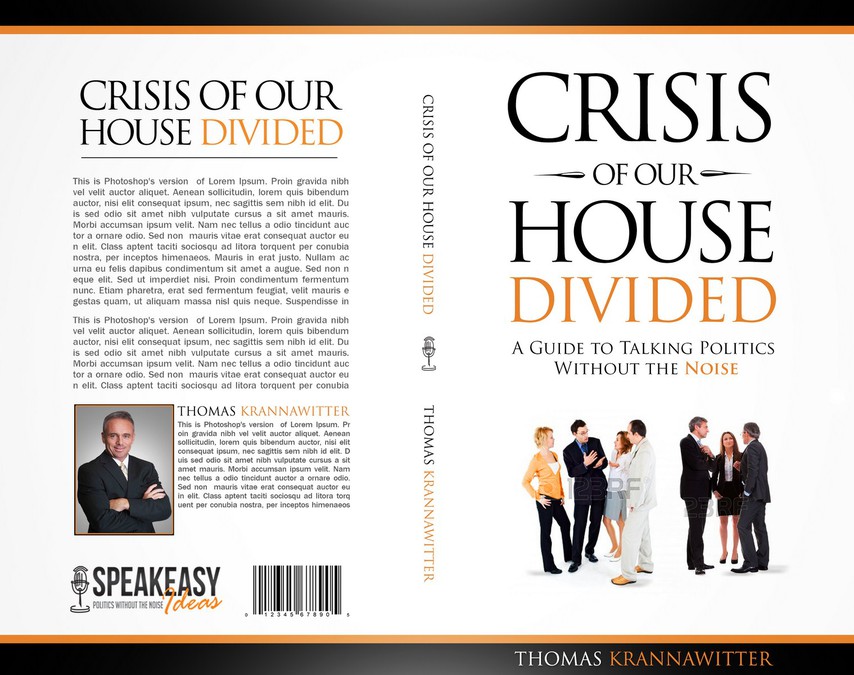 Create a book cover to showcase an optimistic way of talking politics without the noise. 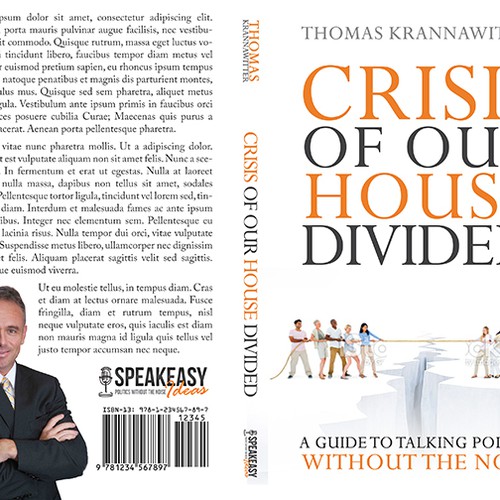 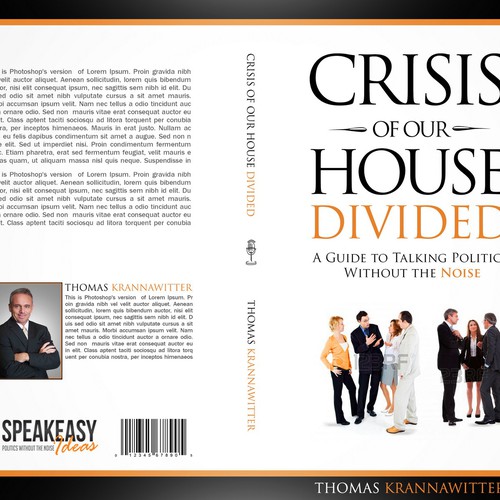 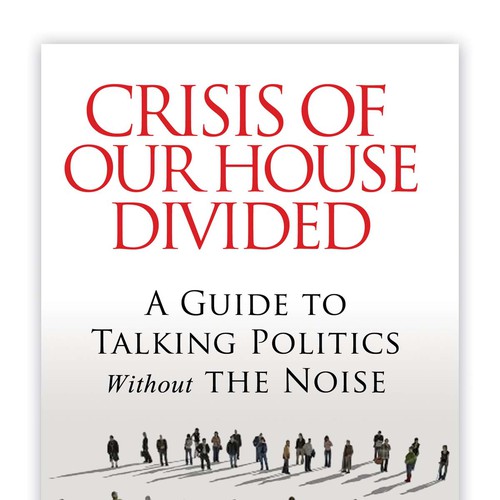 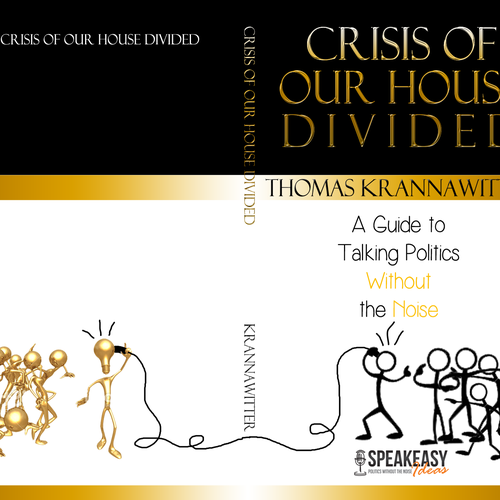 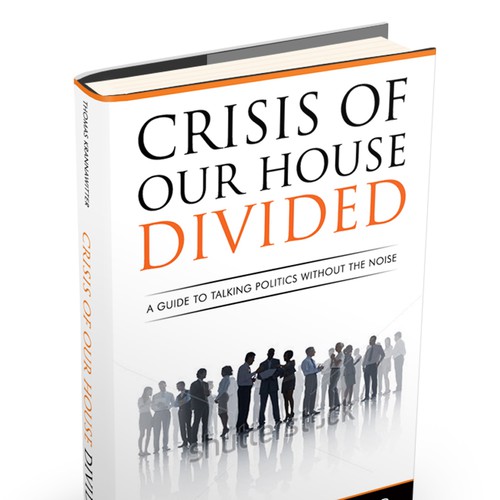 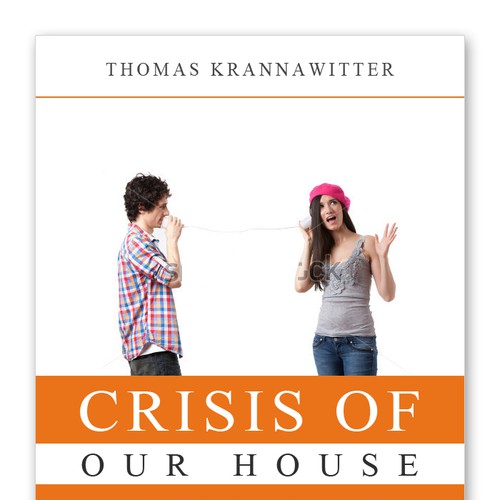 Speakeasy Ideas offers political communication and educational products, tools that train you to speak with your neighbors, family, and friends about political subjects, and discover with one another the many common interests you share that provide the seeds of common solutions, but without the political fireworks.

Today, both sides of the political aisle prefer to shout instead of communicate.

Speakeasy Ideas is changing that.

Citizens today experience politics as talking heads denouncing each other while building walls between Left and Right: walls that prevent understanding—much less trust.

We’ve become used to awkward conversations around dinner tables and fights with colleagues and friends. But historically, politics has been America’s strength. Together we’ve tackled fractious common problems and solved them in a way that has created the freest, most prosperous nation on Earth.

Our products remind Americans how to speak more quietly, yet more persuasively, to each other, not merely as Democrats and Republicans, but as fellow citizens and friends—the kind of conversation we all like to have over a drink, maybe at a “speakeasy.” Most importantly, the kind of conversation that leads to solutions and promotes the progress we all want to experience.

But the political speech of old won’t do. It’s time for something radically better, something that reduces the acrimony while helping us build something good together. Something like Speakeasy Ideas.

This contest it to create a cover, spine, and back cover for a new, small book: "CRISIS OF OUR HOUSE DIVIDED: A Guide to Talking Politics Without the Noise." Author is Thomas Krannawitter.

This book is a short, easy to read, non-academic book that explains why Americans are so pitted against one another, politically and culturally, and offers a way for them to understand and communicate with each other better, possible even come to some agreements about how we might move forward as a country.

The book shows how we have come to a place where many Americans seem angry, as we shout at and fight with those who hold different political views -- including personal friends, co-workers, family members, sometimes even lovers -- or just ignore them altogether. We tend to view those who have different political views as bad people, simply, and that is why we often treat them badly, disrespectfully, rudely.

But the book goes on to make clear that many people who might consider themselves to be liberal or conservative, progressive or libertarian, share many of the same goals, ends, and purposes. Virtually everyone wants, to name just some of things we have in common, safe medicines and foods, reliable cars, phones, and technology of all kinds, and economic growth, jobs, and increasingly better ways of life and more opportunities for more and more people. The main disagreements in the United States today tend to be about the *means* of how we go about getting those things everyone agrees are good.

The book features an account of two fictional countries -- New Dealand and Freeland -- that helps readers understand why people of opposing political stripes approach such matters in such strikingly different ways. By employing this rhetorical device of fictional countries, the book avoids quotations from known historical or political figures that tend to divide people, even by mentioning their names. Thus there are no references to the Founding Fathers, or leading progressive figures such as Woodrow Wilson or Franklin D. Roosevelt, or more contemporary figures like Ronald Reagan or Barack Obama. None of those people appear in the book.

In the end, the book aims to help Americans see their fellow citizens as good people who want good things for themselves, their families, their friends, and others. The book is hopeful and optimistic, filled with promise. By emphasizing the many things we Americans have in common, the book concludes by suggesting ways that we might talk with each other, rather than shouting and yelling, and discover together solutions to problems all of us want to solve by meeting and satisfying interests we share in common.

If possible, would like to explore having microphone image from attached logo file to be pictured somewhere on bottom of spine.

Back cover likely should also contain picture of author (attached) and brief bio. Placeholder text for author bio is fine for now.

Logo design for consulting company
299 $
Consulting company focusing on effective government and private sector engagement in development and sustainability
53
entries
24
Designer
Assemblyman Brian Bergen Challenge Coin Design
599 $US
NJ State Representative for the 25th District
51
entries
8
designer graphistes
Design a logo for a pro-housing organization to communicate a positive urban vision
$699
https://abundanthousingla.org/about-ahla/ Abundant Housing LA is committed to education and advocacy on the affordabili
127
entries
29
diseñadores
Logo for a Powerful International Program for People of African Descent
US$499
The International Decade for People of African Descent or (IDPAD) is a coalition of people and organizations that fights
49
entries
20
diseñadores
Design a modern logo for a political podcast website
$299
Unbiased news and podcasts.
76
entries
12
デザイナー数
Just Culture Campaign
309 CHF
Please find a detailed briefing attached in the files.
209
entries
30
designer graphistes

Inizia subito
Podcast Logo
529 $CA
Podcast to discuss misuse of power of government agencies
44
entries
15
designer graphistes
Sophisticated '2A' logo for common sense gun laws
299 USD
Our target audience is supporters of the 2nd amendment.
19
entries
4
designer
Give us a strong actionable LOGO! Just the logo!
US$ 359
This is a Grassroots C4 for an allied organization. We would like the design to be similar to our current logos, but mor
47
entries
24
designers
A powerful logo for an app to help solve one of the world's biggest problems.
$299
Our product is a mobile app used to report instances of corruption. We are branding a trusted social platform for people
157
entries
23
diseñadores
Design a powerful logo for a political group in the United States
US$ 299
Republicans for Redistricting Reform wants to put the power to draw election district maps in the hands of voters - not
131
entries
27
designers
Design a creative logo for a political campaign!
$ 299
Douglas Tuman is running for congress and would like a logo that represents strong leadership, uniting people together,
175
entries
64
Designer
Maggiori informazioni sul design di copertina per libro o magazine
Scopri come funziona