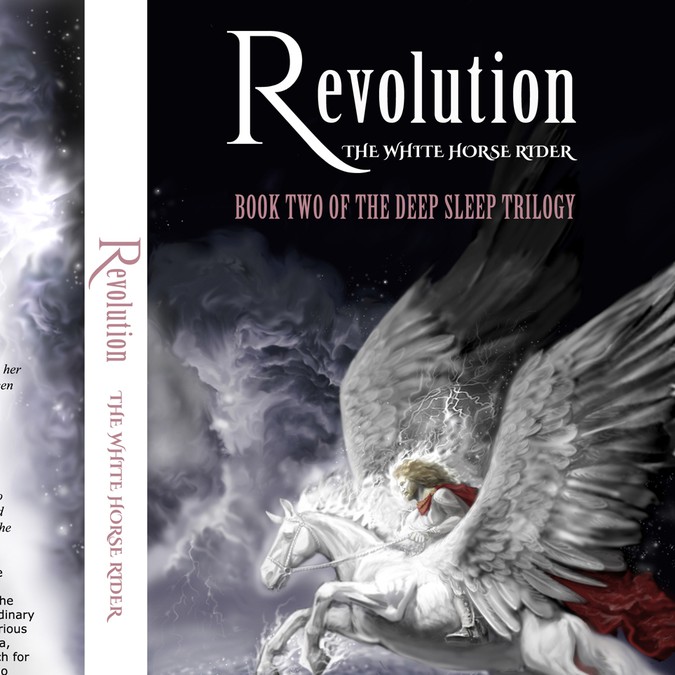 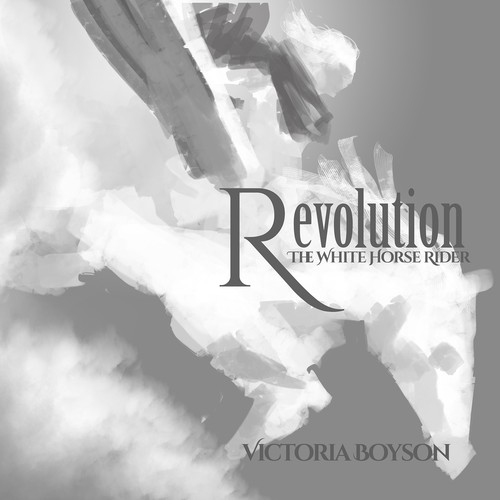 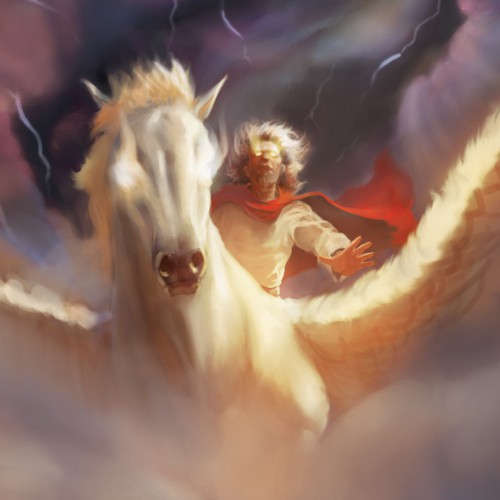 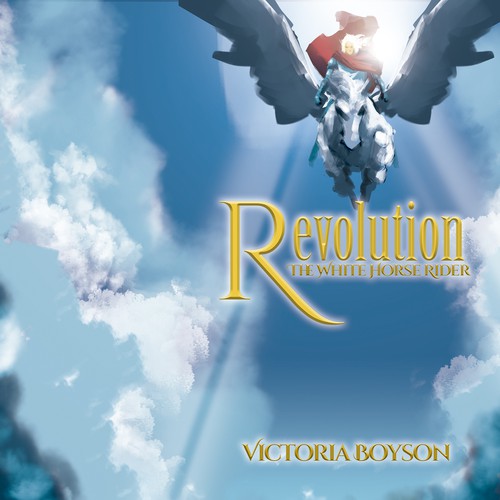 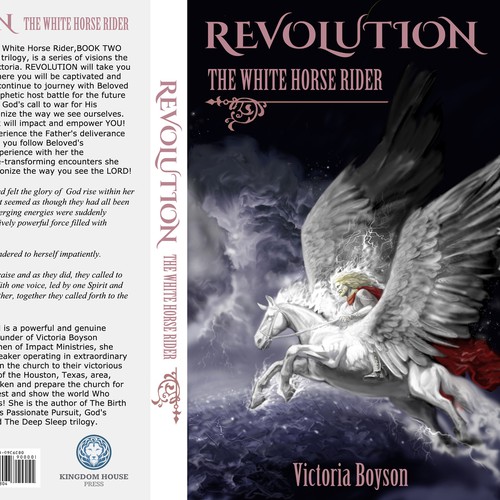 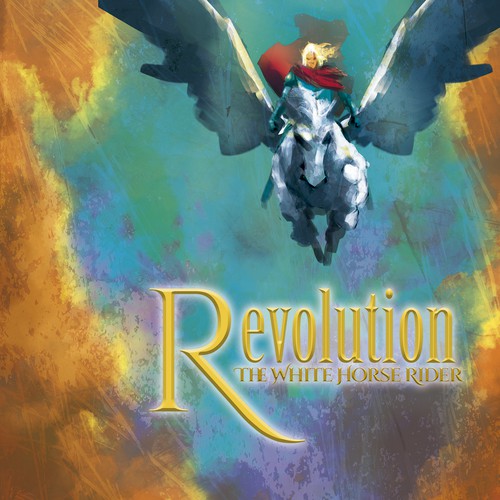 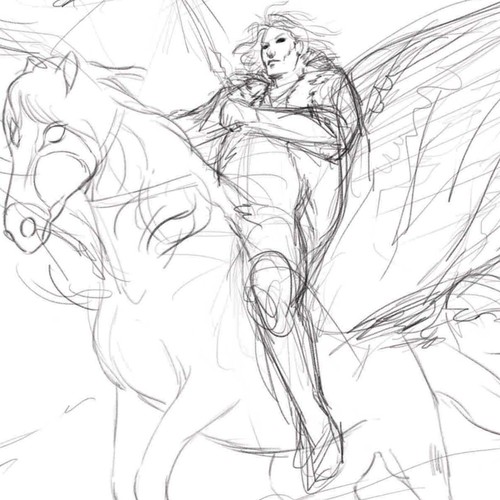 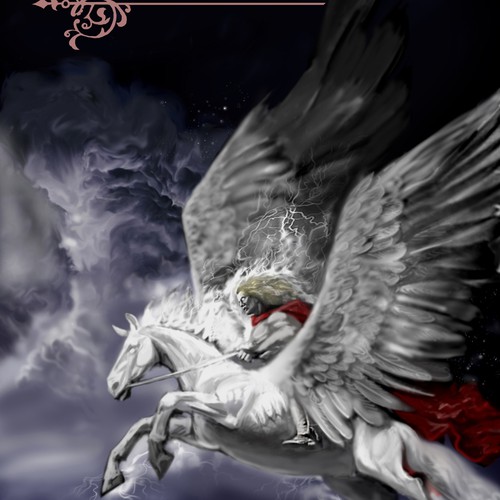 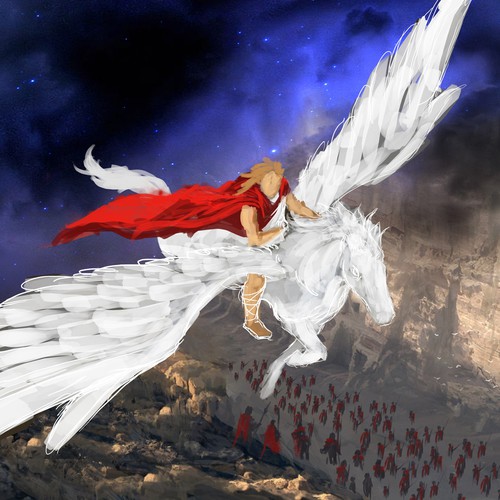 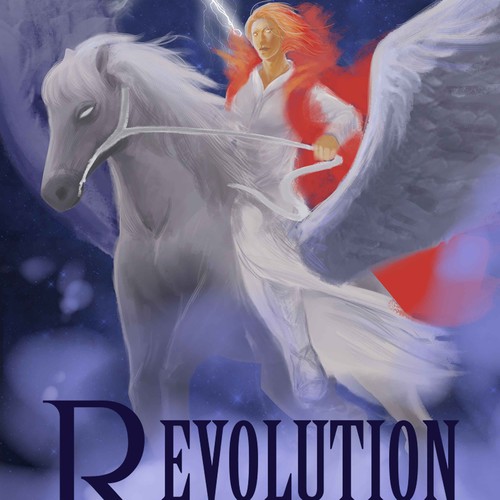 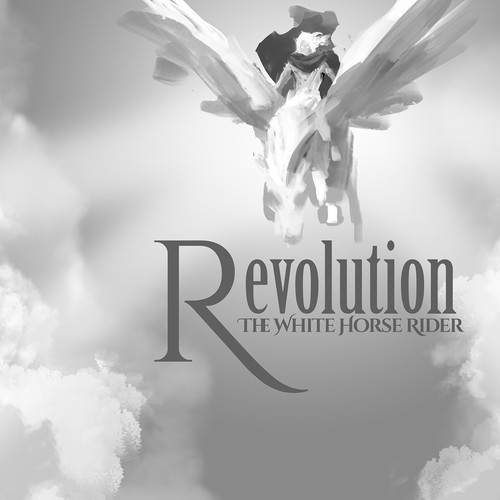 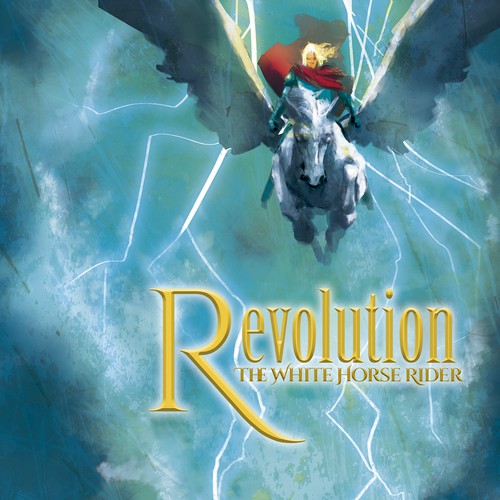 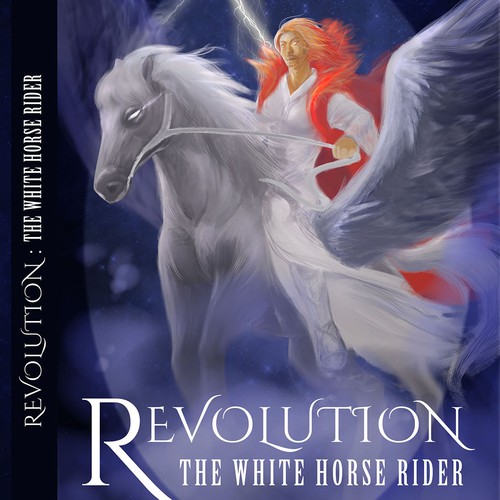 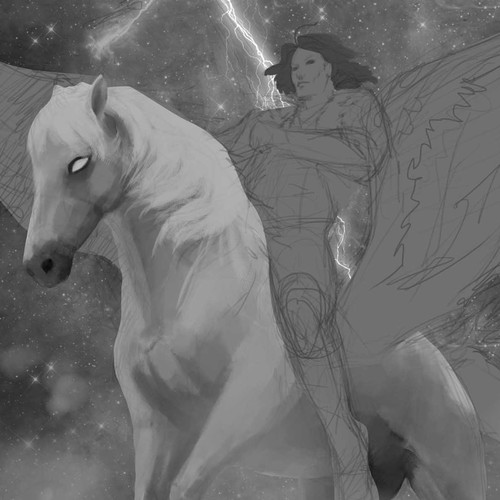 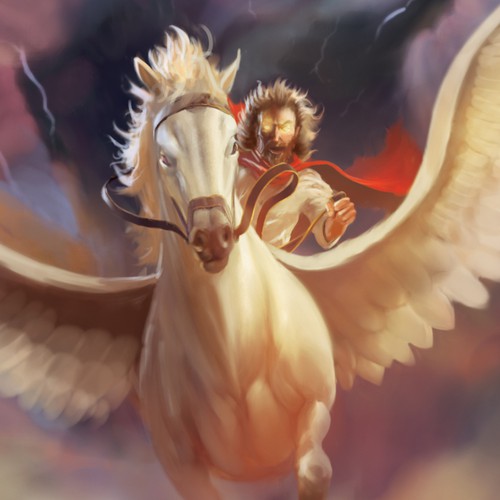 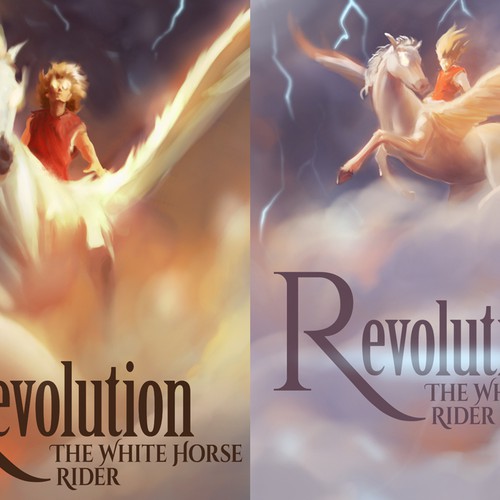 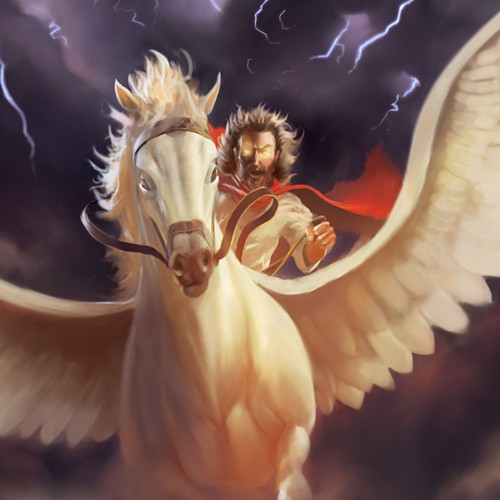 This book is a visionary journey along the lines of a Christian Fantasy to encourage and awaken the body of Christ.

The title is "Revolution" and the subtitle is "The White Horse Rider."

This is the sequel to Awakening: The Deep Sleep by Victoria Boyson and should have some elements, such as fonts, that tie the two covers together.

The author would like the cover to feature a character called the White Horse Rider upon his white horse, flying in the clouds. For extra detail, designers could add an army far below on the ground if they feel inspired to, but the main thing we want here is the horse and rider in the clouds.

The rider should be surrounded by a fiery, electrified cloud that looks like a cross between storm clouds and a nebula (like in space).

The White Horse Rider should have an intense face with eyes beaming with light. He is a man (not a young man) and has a trim beard. His hair is shoulder-length and messy (should be blown around by the wind) and looks like a cross between a lion's mane and fire. He is dressed in plain white, but wears a red robe that is sleeveless, attached from the chest and is trimmed around the neck and sides with what looks like a lion's mane that sort of blends with his hair.

The horse has wings and has light coming out of its eyes. It is muscular and fierce.

Here is an excerpt from the book that will describe the scene and the appearance of the rider:

"Flying high above the radius of the great army below, a lone rider sat atop an enormous, gleaming white horse. With wings that filled the expansive sky, the great horse conveyed a warrior of golden fire more brilliant than the steed on which He rode. The strikingly regal display of immeasurable power made her heart stagger in response.

Frozen by His breathtaking magnificence, she was captivated by His appearance. His face was framed by hair that seemed to flow as fire behind Him like the mane of a great lion. Streaming out all around Him, covering His brilliant armor, the Rider's robe was alive. Cascading down the back of the great beast He rode, it flowed like liquid fire tipped in blood. His golden-brown hair was wild, streaked with the rays of the glorious light that shown out from His face.

Like a mighty wave in an ocean tempest, Beloved watched as a cloud of fire roared all around Him and His massive steed. Rolling in all directions inside of itself, it filled the realm of the Divine as He rode.

Building in violent intensity, the storm labored to birth a massive celestial nimbus nebula. Crowning Him in light, it framed Him in a halation aureole, transcending the regions of heaven. Stunned, yet without fear, Beloved felt certain she could see human faces appearing occasionally in the cloud as it rotated violently."

The fonts that were used on the first book (Awakening: The Deep Sleep) were Cinzel Decorative and Birch STD. We would like these fonts used on this cover to tie the two together.

If you have any questions, please feel free to ask.

It will be a 5x8 paperback printed through CreateSpace and IngramSpark as well as a kindle eBook, so need files to meet their requirements. The book is 119 pages.

Will attach author info, synopsis, barcode and logo for back cover.

The fonts that were used on the first book (Awakening: The Deep Sleep) were Cinzel Decorative and Birch STD. We would like these fonts used on this cover to tie the two together.

My PLACE Tools
USD 299
PLACE Ministries helps people identify their passion and calling through a set of tools. We are rebranding our college m
59
entries
13
diseñadores
Seeking An Eager Designer for International Yoga & Eastern Philosophy Organization
CAD 399
Hi There, Thank you for your interest. The work at Vidya Institute focuses on the field of yoga, but dives much beyon
37
entries
10
diseñadores
A modern logo refresh for global NPO focused on personal & leadership development
269 €
Provide training and resources for personal spiritual growth and leadership development for individuals, churches and re
160
entries
17
Designer
Northwest Summer Camp Vibes
299 US$
Christian Summer Youth Camp
265
entries
41
designers
Church of the Void - help start a new religion!
429 $US
**this is not a christian chuch. Please do not include crosses.** We are a congregation that is promoting the practice
84
entries
13
designer graphistes
Church Plant Wanting To Give Hope To The Wounded and Marginalized.
299 USD
Our faith-based organization is nestled in a residential community with downtown Atlanta as a backdrop. In this urban/s
46
entries
6
designer