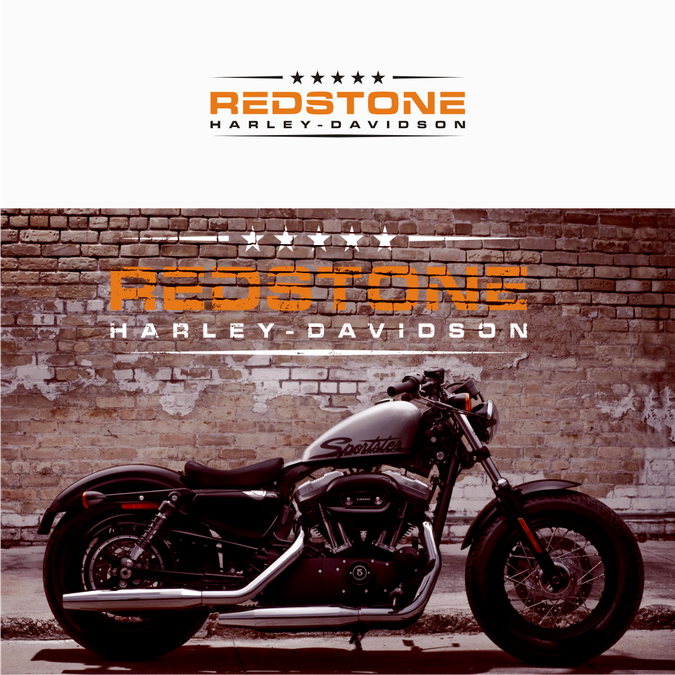 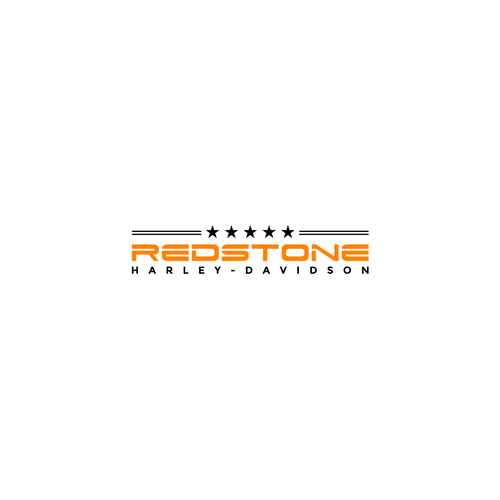 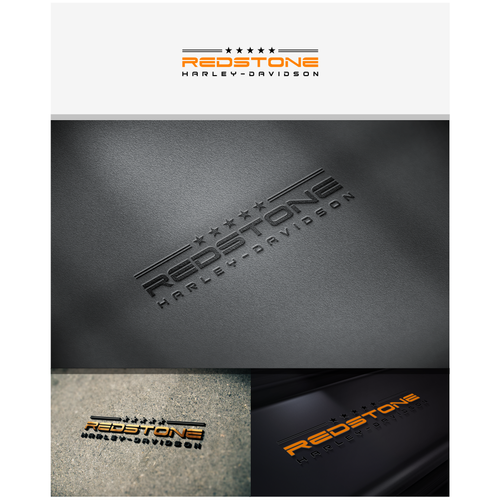 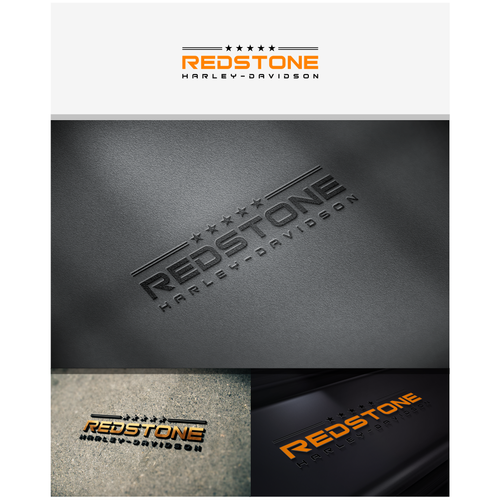 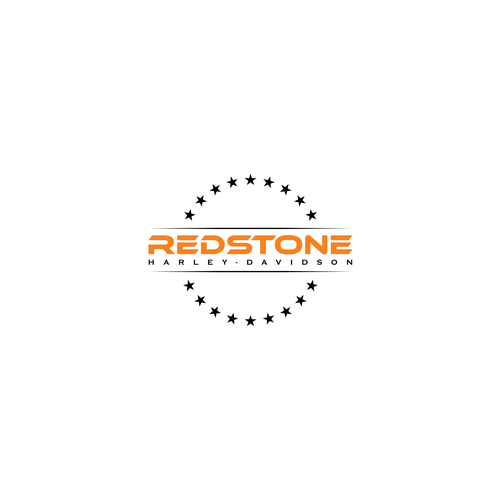 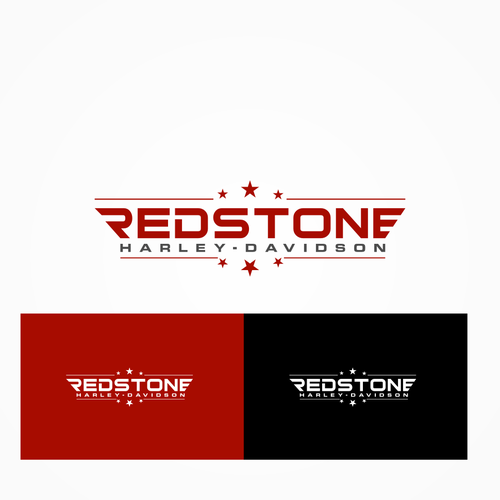 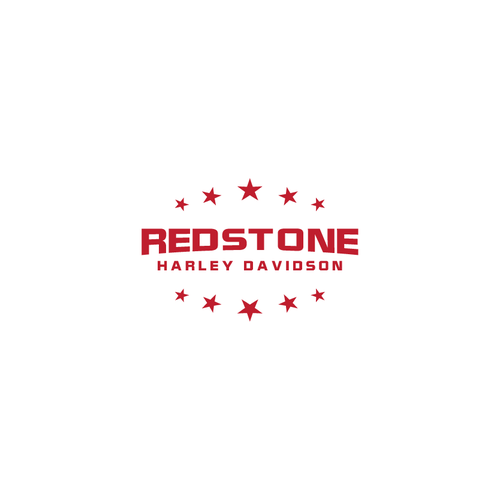 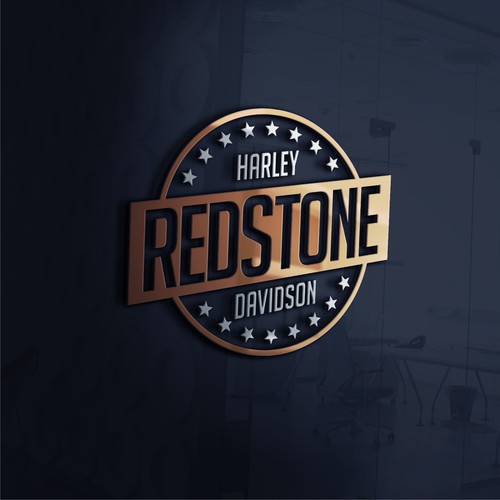 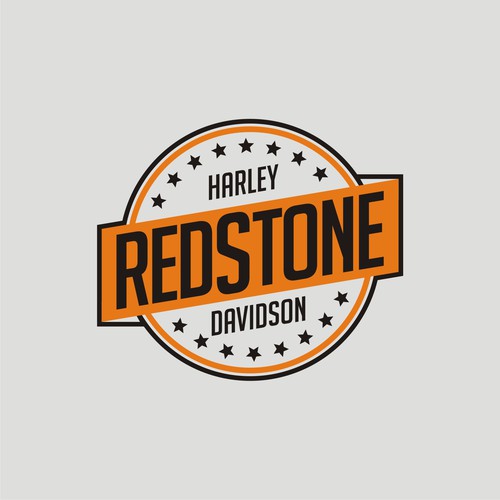 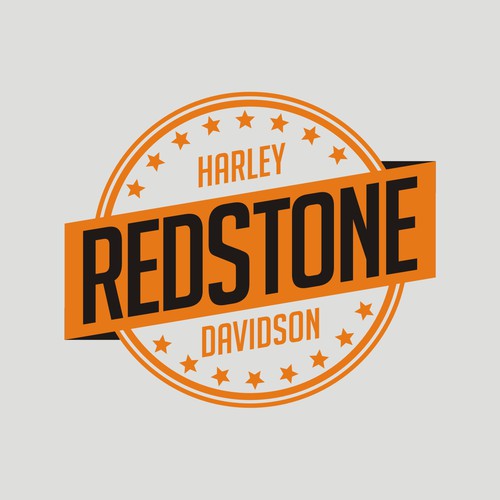 Must meet Harley-Davidson motor company logo standards, as this is for a new dealership that I am buying.

Below is what i gave H-D why I want to change the name from Rocket Harley-davidson to RedStone harley-davidson. Logo will be used on everything!! must be clean and professional.

I have decided that it was necessary to change the name of Rocket Harley-Davidson to Redstone for the below reasons.

Scott Fisher highly recommends it, he feels that it is necessary because of the poor reputation he has developed.
Ensure that every customer knows for sure that a new owner is here.
Huntsville has grown to be known for more than just Rockets. Redstone Arsenal is the main reason for growth and the reason why other businesses have invested in the area.
Will ensure the dealership does not get mixed up with any other competitors or other local businesses using “Rocket” in their name.
Will give me a better platform to rebrand and reenergize the local population
Allows customers to ask why “Redstone”; it’s a perfect conversation starter. Something similar I have seen at Six Bends Harley-Davidson.

Not just Rockets are a part of the area’s history; to be more accurate the most important landmark is Redstone Arsenal. Redstone Arsenal (RSA) is a United States Army post and a census-designated place (CDP) adjacent to Huntsville in Madison County, Alabama, United States and is part of the Huntsville-Decatur Combined Statistical Area. The Arsenal is a garrison for a number of tenants including the United States Army Materiel Command, Army's Aviation and Missile Command, the Missile Defense Agency of the Department of Defense, and NASA's Marshall Space Flight Center.

Originally a chemical weapons manufacturing facility for World War II in the immediate post-war era, it became home to the German rocket scientists that were brought to the US as part of Operation Paperclip. The team first worked on ballistic missiles, starting with V-2 rocket derivatives before moving on to a series of ever larger designs. Many of their tests were carried out at White Sands Missile Range and flights between the two locations were common.

Origin of the Name

Research shows the name Redstone comes from the color of the soil in which the Arsenal was built upon, the same ground in which dealership was built. The dealership is only ten miles away from the arsenals property line.

Targeting customers with the proper name is critical to the dealerships success. I feel that the name Redstone will have more significance to our current and future customers. Below outlines some of the areas statics and shows the reason I think removing the “Rocket” name is key for growth and differentiation.

As you will read, the city is more than just a community that makes rockets. It is a community that is surrounded by highly educated future minded technology focused people that are there because Redstone Arsenal started that mind set and expectation.

Cummings Research Park (located in Huntsville) is the second largest research park in the United States and the fourth largest in the world
One of the Top Smartest cites in the world
The country’s top mid-size city to launch and grow a small business
One the country’s top five places for defense Jobs
Top 10 Tech City of United States
Highest concentration of degreed engineers in the world
One of Forbes leading cities for business
One of the Country’s hottest mid-sized cites
53% of population have bachelors or higher
Average Family income in $90,146
49% of household have earned $50,000 or more
23% of household have earned $100,000 or more
Median household income is: $58,199
One of the best places to raise a family
One the country’s Top 10 places to live
One of the Top 10 green cities in the country
Best values for salaries and cost of living
The #1 mid-market in the south

Display your logo to minimum 60000 people daily
599 $US
Select Bilar (Selected cars in Swedish) is a new car dealer in the heart of Gothenburg, we have a prime location and ...
225
entries
46
designer graphistes
Building next Unicorn within emerging markets
1.599 USD
New start up in undisclosed region somewhere on this planet. Simply put, we buy and sell tons of used cars through ma...
366
entries
111
designer
Automotive Repair shop
599 $
Automotive repair shop that specializes in full service for foreign and domestic cars.
115
entries
31
Designer
Design a cutting edge logo for a new Towing Company
$ 899
New Towing Company doing repossessions, wrecks, and general towing.
517
entries
90
Designer
Create the brand for the one and only "Bullet Brake" Motorcycle parking brake.
$ 599
This product is a one of a kind parking brake for motorcycles and ATV's of all brands. Want the logo based on the submi
105
entries
42
Designer
new logo for rental car company
599 $US
car rental maui
162
entries
22
designer graphistes

Inizia subito
Looking for a Dynamic and Creative logo for a Tryes Factory
US$ 1.599
Retreading of tyres, and the audience will be corporates and individual. All designers, please visit the company website
232
entries
105
diseñadores
Cool Logo for Extended Auto Warranty!!!
US$ 1.599
Our company sells extended auto warranties, which covers their repair bills when their vehicle breaks down.
255
entries
50
diseñadores
CRMCop needs an arresting identity!
$ 599
Remotely monitoring of Clients' CRM (Customer Relationship Management) software, looking for and reporting on sales proc
132
entries
35
Designer
Hyundai Truck dealership looking for a unique but simple logo
799 $AU
Selling, Servicing & Parts for New Hyundai Trucks & Commercial Vehicles
96
entries
14
designer graphistes
Design an automotive logo for Xifa Bayati, then design my how it looks on my new factory
AUD 999
Xifa Bayati is an automotive mechanical workshop that specialises in the preventative maintenance, general service and m
163
entries
37
diseñadores
Classics and Beyond Auto Gallery & Museum Branding Package
599 $US
A concierge approach to the history of the automotive industry. Featuring items such as toys, signs, petroliana, and veh
79
entries
21
designer graphistes
Maggiori informazioni sul design di logo e immagine aziendale coordinata
Scopri come funziona