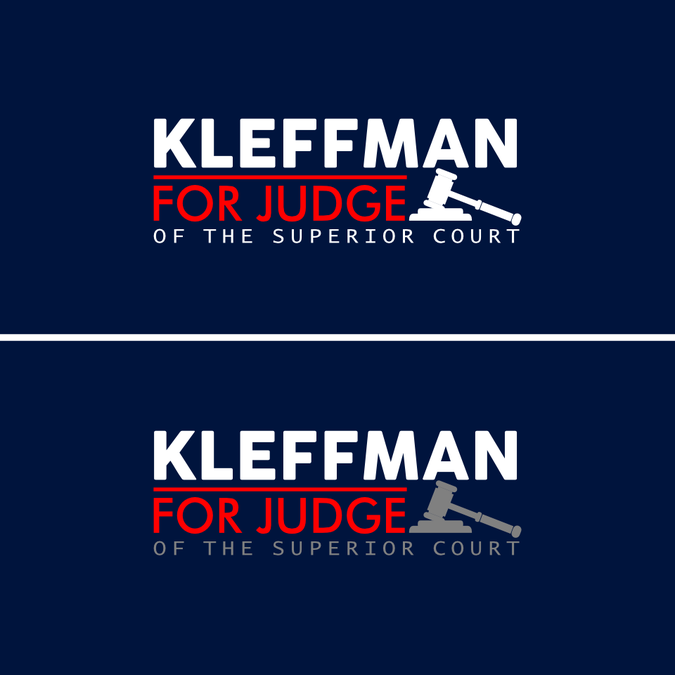 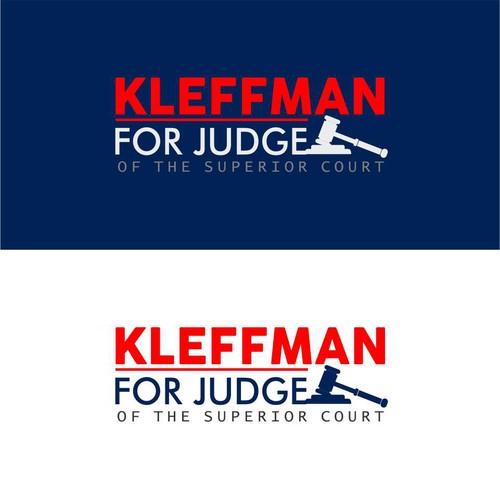 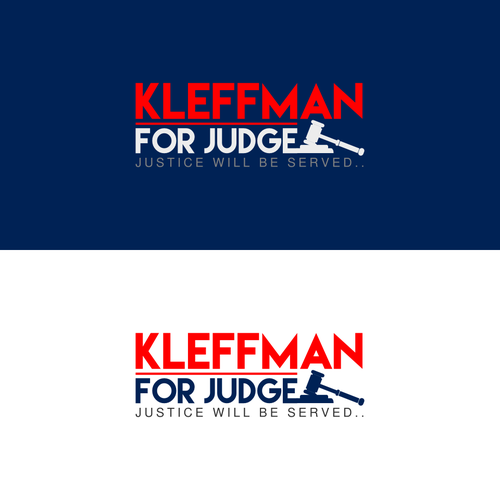 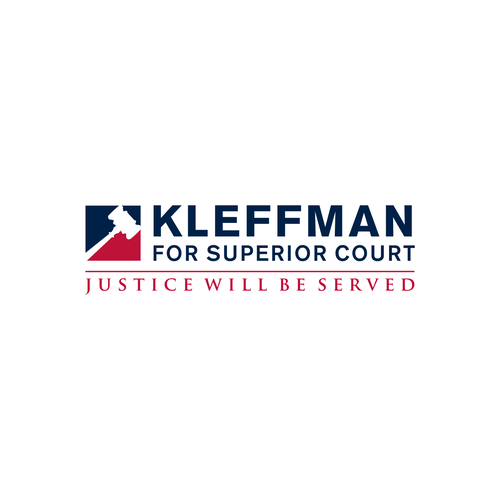 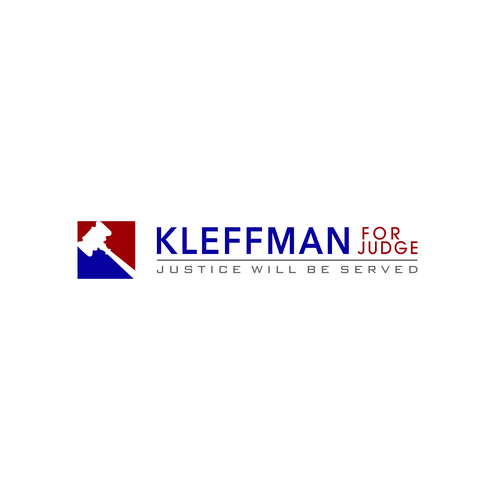 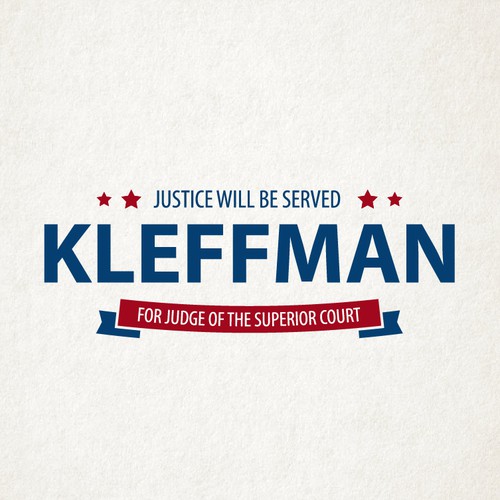 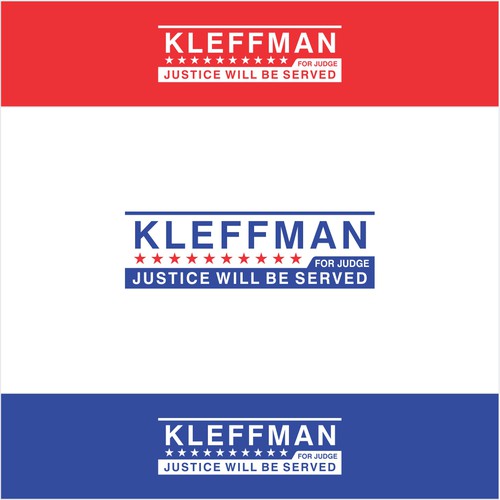 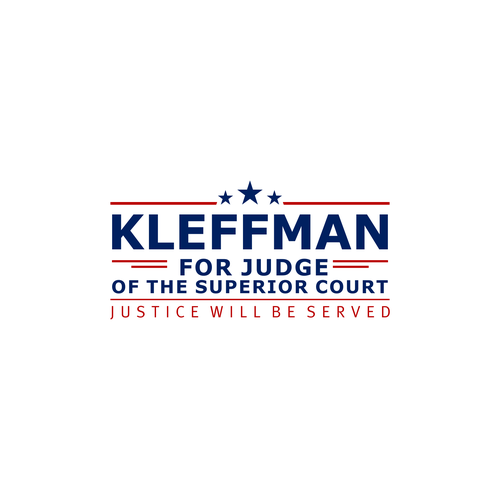 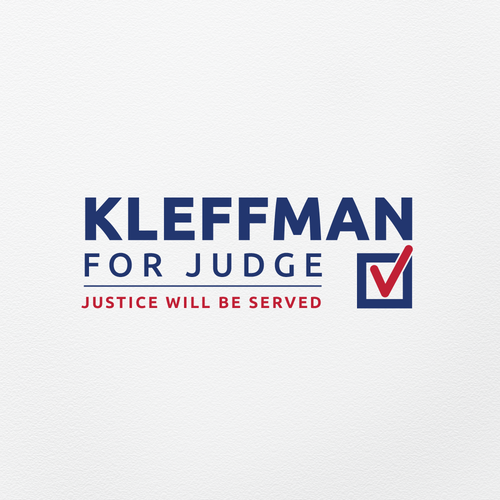 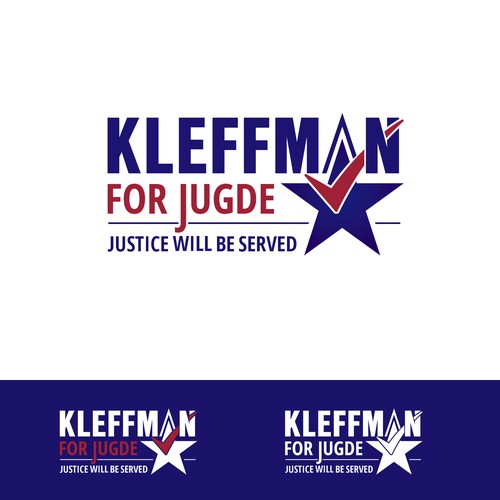 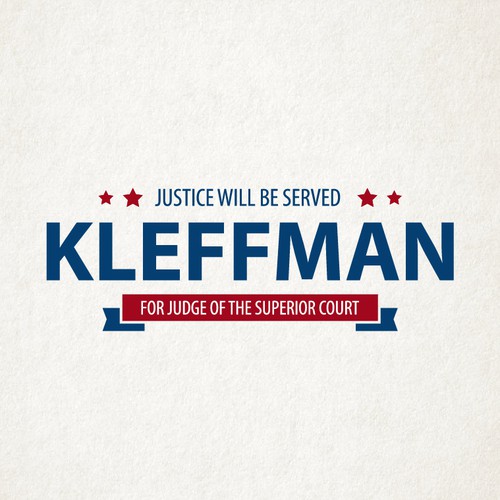 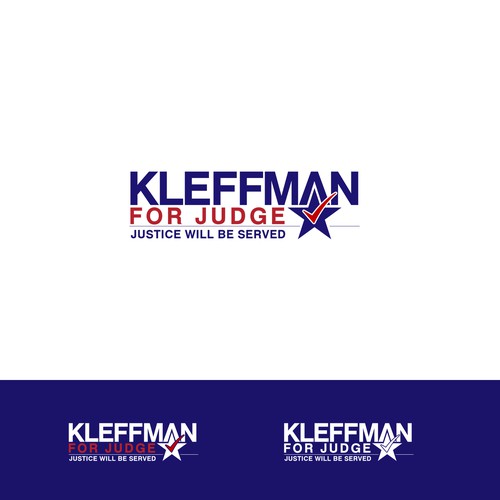 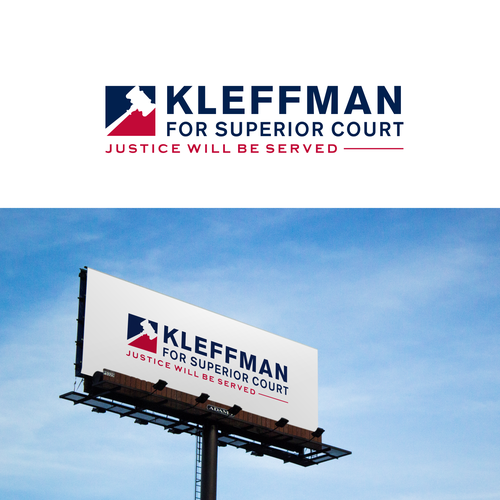 Justice will be served.

Craig Kleffman - I'm running for judge in San Diego in 2016. I'm a Deputy District Attorney (prosecutor), currently, in Los Angeles, CA. AtT the time of the election, the ballot will say CRAIG KLEFFMAN - Gang/Homicide Prosecutor. It is a non-partisan race, so no party will be mentioned. Local elections of this type are known as low information races: No one knows anything about the candidate. The only purpose of the campaign is to gain name recognition. I expect to use my website (craigkleffman.com [it's also getting a makeover in the next few weeks]), social media [twitter: @t_kleff, Kleffman for Judge on facebook], yard signs, and some flyers delivered to the most important voters to further my name recognition. So, I expect to fully use the logo. Moreover, although I'm running in 2016, if I fail, I expect to run again in 2018 -- consequently, I don't want any dates in the logo, as i would expect to reuse them. Finally, I am conservative by profession and nature. And, while I can't be overly public about it, I do believe it is important that violent criminals go to prison for a long time. So, what some of the election rules for judges prohibit me from being that explicit, but nonetheless, the undertone of my message will include that idea. I'm a family man (with two small kids) and a nice wife.

I do expect there will be further design work through the campaign: e.g., social media, website, cards, flyers, banners, etc. etc. etc. I looked through prior designs and found several designs I thought were excellent: (1) Tom Gordon logo by "Pinksalty" (find at: https://99designs.com/profiles/1412…Dpolitics; (2) I like the Chet Middleston design, too (here: https://99designs.com/profiles/2091…26page%3D3 (3) Frontline Political Strategy is also simple, which I like (here: https://99designs.com/profiles/1300…26page%3D4. Finally, simple design not only speaks to me, but will reduce the price of reproducing yard/highway signs (fewer print colors) -- and should also emphasize the candidate name, as that is far and away the most important aspect of the marketing--name recognition.

OnGaming Canada
CA$399
OnGaming Canada Inc. is a company in the gambling industry based in Ontario. We are a professional services firm that
101
entries
36
デザイナー数
California Families for Health Rights logo
US$ 299
Looking to have a logo created that will go on a website and in marketing materials for a political fundraising organiza
76
entries
30
designers
Who wants to go to U.S. Congress?
US$ 299
John Cain is a candidate for U.S. Congress. This is his campaign logo.
113
entries
30
designers
State over Party logo
$ 299
This is for the state of Texas, so the logo needs to work using an image of the state of Texas. The logo MUST show eithe
44
entries
12
Designer
Design for a new political website needed ASAP.
399 £GB
This is a new website set-up to track the betting markets as it pertains to politics.
216
entries
76
designer graphistes
FactsMatter.com, a Political T-Shirt site, Needs A Logo!
US$ 299
I intend on making FactsMatter.com a site that sells political T-shirts promoting facts. Facts like "Global warming is r
126
entries
24
designers

Inizia subito
Logo for AI-based Political Analyses about Germany
819 €
Open Discourse is a project about political education and will become a web platform soon. It analyzes parliamentary deb
201
entries
60
designer
Just Culture Campaign
309 CHF
Please find a detailed briefing attached in the files.
209
entries
30
designers
Logo for second amendment group!
USD 299
Political advocacy for 2nd Amendment rights at state and local level
15
entries
3
diseñadores
VOTE TO SAVE US - Design The Iconic 2020 Get Out The Democratic Vote Art
899 US$
Vote To Save Us is a grass roots organization, set up to encourage Democratic voters to participate in the 2020 election
173
entries
48
designers
Need a Logo for French voters list, South of France, Pyrenees
449 €
We are an electoral list that is presented to the municipal elections in France on March 15 and 22, 2020. It is at the s
32
entries
5
Designer
Texans for True Conservatives PAC
299 USD
Politically conservative audience
42
entries
6
designer