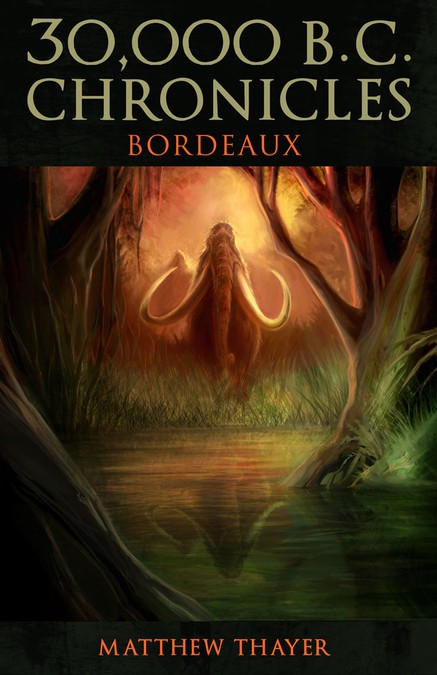 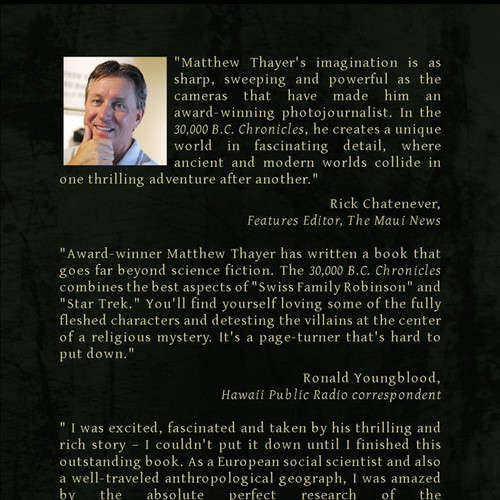 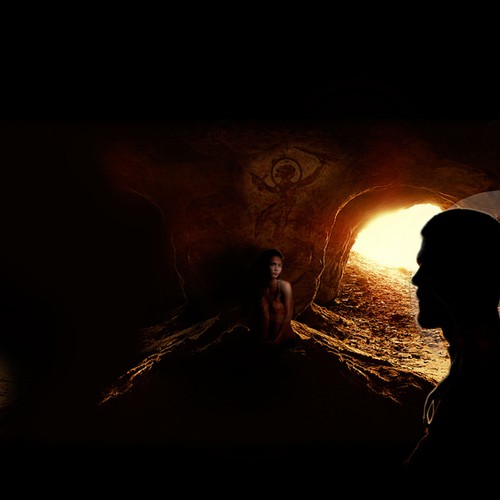 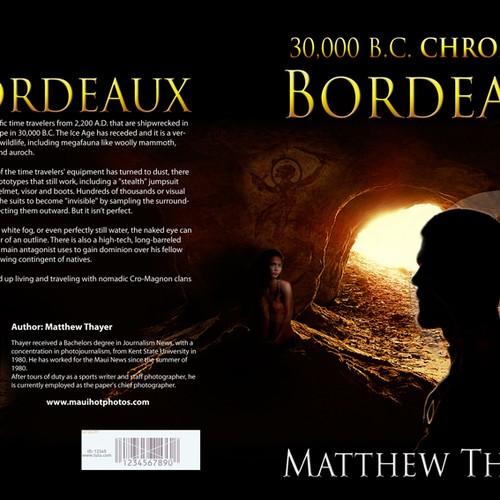 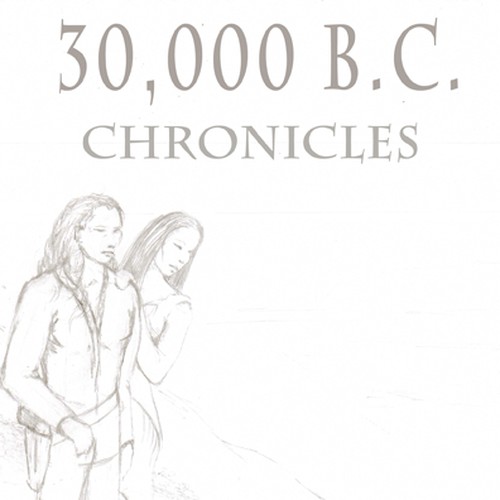 I am interested in a painting for a book cover, and an overall cover design.

The horizontal painting would serve as the backgrounds for the front and back covers of a novel about a team of scientific time travelers from 2,200 A.D. that are shipwrecked in the wilds of Europe in 30,000 B.C. The Ice Age has receded and it is a verdant land rich in wildlife, including megafauna like woolly mammoth, rhino, red deer and auroch. The series is; 30,000 B.C. Chronicles. The first book of the series is titled, Bordeaux. I plan to release 30,000 B.C. Chronicles
Bordeaux
next month as an e-book.

The painting does not need to be overly detailed, but to provide a time juxtaposition, it may include one or two modern tools. While nearly all of the time travelers' equipment has turned to dust, there are a few new prototypes that still work, including a "stealth" jumpsuit complete with helmet, visor and boots. Hundreds of thousands or visual receptors allow the suits to become "invisible" by sampling the surroundings and re-projecting them outward. But it isn’t perfect. Against blue sky, white fog, or even perfectly still water, the naked eye can pick up the waver of an outline. There is also a high-tech, long-barreled revolver that the main antagonist uses to gain dominion over his fellow travelers and growing contingent of natives.

The voyagers end up living and traveling with nomadic Cro-Magnon clans to survive.

In the included sketch you will see a couple in the foreground overlooking a valley where a herd of mammoth walk in the distance. The man is wearing a stealth suit. The woman is not. She is a Cro-Magnon woman dressed in a tan, cured leather toga. That's kinda what I'm looking for but I'm open to new ideas. There are also attached some previous cover concepts.

With two books finished and a third in the works, I am looking to set the tone for the 30,000 B.C. Chronicles series and perhaps begin a working relationship with an artist and designer for future releases in the series.

Though my book may be categorized as Science Fiction, it also Historical Fiction. I am not looking for mythical or magical.

Demographics - both men and women enjoy the book, but I would guess the target audience as males over 30.

Writing fiction is a side job for me. I am the chief photographer at The Maui News in Hawaii. To learn more about me check out my website. http://www.mauihotphotos.com

Design an App Icon for a Revolutionary Social Media App
$199
We are an app that creates photo contests. We are gamifying and monetizing social media. Users upload photos into contes
236
entries
23
diseñadores
Landing page for a novel photography game site
$349
We make learning photography fun and simple by providing a number of games and features users can play and learn photo t
61
entries
9
デザイナー数
Bethany Grace Images
299 $US
I am a portrait and family photographer, most of my images are produced using only natural light, one element I absolute
67
entries
20
designer graphistes
Memory Board Frames E Commerce Site
US$ 299
Frames for pictures used for special events.
127
entries
17
diseñadores
simple but elegant logo for my photography business
299 US$
Freelance commercial photographer working in advertising and editorial fields.
115
entries
19
diseñadores
Logo - Lion Head Illustration for a documentary family photographer couple
EUR 449
we are two documentary family photographers
71
entries
23
Designer

Inizia subito
Birth Photography Logo Design_Minimalist, Abstract, Organic
$299
I am a free lance photographer with a focus on birth photography.
99
entries
23
デザイナー数
Hip & High End Logo for Video company
US$499
Unique videos for Realtors that showcase an individual property while simultaneously branding the Realtor.
57
entries
16
diseñadores
Need a logo for our aerial travel poster business
299 $
Airworthy sells aerial photographs to our customers. We sell "aerial travel posters" via posters, framed posters, and ca
24
entries
10
Designer
Get ready to BRO it up! Masculine business card needed for male photography business!
US$ 299
I do all types of male portrait photography, including fashion, fitness, western, casual, urban, etc.
230
entries
22
diseñadores
Logo for a plateform for Photographers and other image creators
$299
We are are a platform which allows photographers, videographers and post-production specialists to network and for clien
83
entries
25
デザイナー数
Looking for a minimal logo design for my yoga & portrait photography business
269 €
I am a yoga/movement & portrait freelance photographer. I work with natural light and look for simplicity and compliment
158
entries
34
designer
Maggiori informazioni sul design di altri
Scopri come funziona