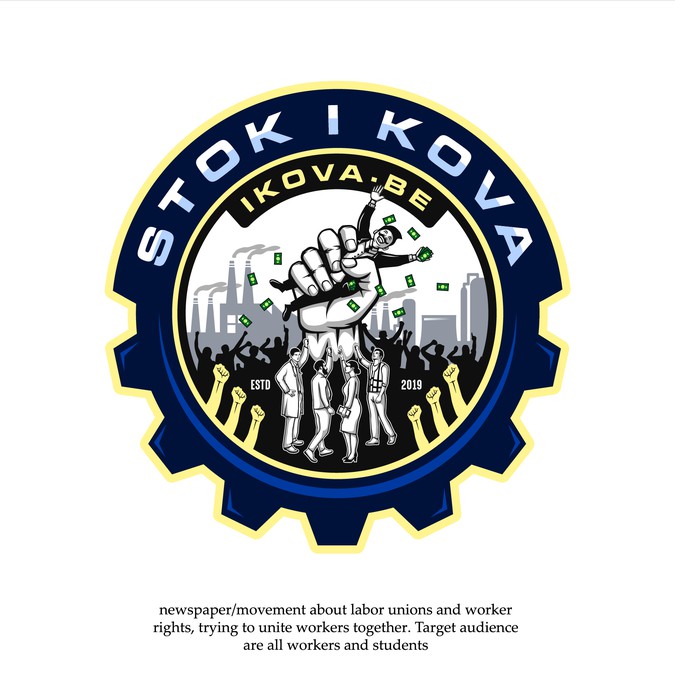 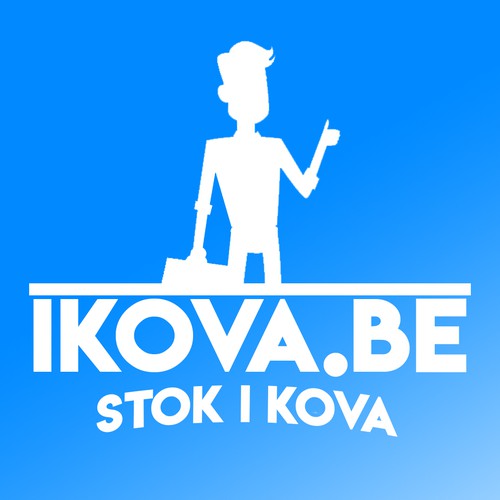 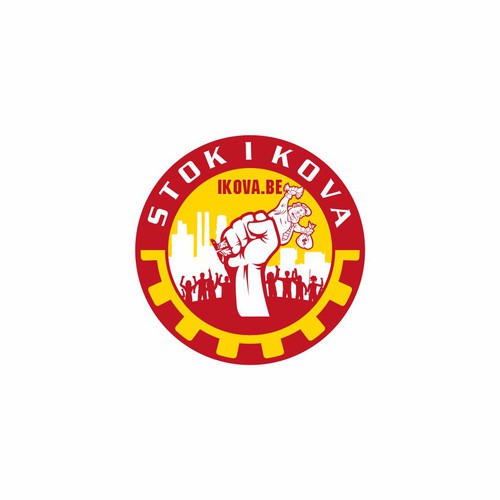 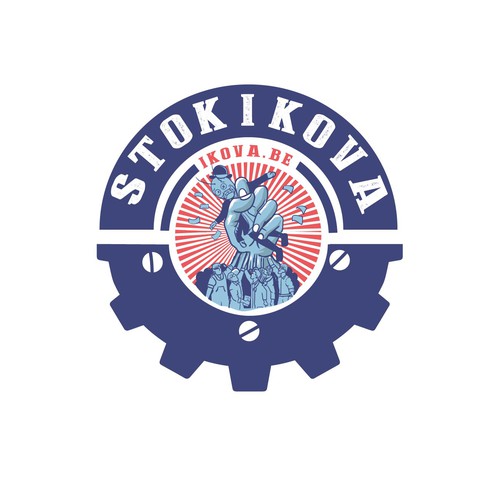 Its a newspaper/movement about labor unions and worker rights, trying to unite workers together. Target audience are all workers and students

I am not sure about the colors, so I leave it up to the designers.
I have reference image with objects/layout idea. At the bottom of logo I imagine something a-bit-modern-technology-looking like. For example, a cog, as in Turkish Communist Party, which goes by the yellow color in my sketch and by number #1; Then, I image workers, teachers, medics merging into single fist, as per reference image, blue color, under number #2; It might be silhouettes of those people, depends on the overall logo aesthetic and colors you choice to make. But important to be able to differentiate between their professions, and to see them merging into one single fist. Then, this fist is holding capitalist cockroach, squishing it, similar to what we see under number #5, and banknotes are flying out from capitalist away. Under #3 in image we have logo name, which is actually going to be a website address, and #4 a slogan. The image might also contain some factories/industry thematic in the background or somewhere else integrated. Now, this reference has quite of elements already decided, so the main job here is to somehow put everything together aesthetically, with nice color play, to make overall sense of: "People, workers, unite squishing the capitalist in their fist". As for the rest of the package (headers, FB/twitter stuff, its all fully up to the designer, just make sure it matches the logo and is builded around it. Probably some factories/industry will work for the background theme just ine

Two Minute Take - teaching politics two minutes at a time....
399 $
The Two Minute Take (see TwoMinuteTake.Org) is a new web series teaching politics in short, fun, whimsical - non-partisa
103
entries
17
Designer
Create a brand for Australia Worldwide - the voice of Australians globally
899 USD
Australia Worldwide is a political movement. Our goal will be to ensure prosperity for future generations of Australians
201
entries
54
designer
Design an elegant logo for Khushnood, an Afghan journalist and political expert
$ 399
Khushnood is a journalist and political expert. He founded Khaama Press, one of the top English news agency of Afghanist
43
entries
10
Designer
Logo for New, Small Political Consulting Firm
299 USD
My company is a small political consulting firm mostly focused on Republican leaning causes and candidates.
64
entries
18
designer
A powerful logo for an app to help solve one of the world's biggest problems.
299 US$
Our product is a mobile app used to report instances of corruption. We are branding a trusted social platform for people
157
entries
23
diseñadores
Design an inspiring and memorable logo for a local county commissioner candidate
299 $
Barry is a political candidate running for Clay County Missouri Western Commissioner.
83
entries
22
Designer

Inizia subito
Organisation Playbook
AU$ 269
The organisation is a local council. It serves the City of Bunbury
80
entries
24
designers
Create an ICONIC Lifestyle Brand for Black Men : "Black Men Build"
US$ 899
Black Men Build is a brand that brings Black Men together online to discuss important issues. It is meant to aesthetica
284
entries
95
designers
Fun Logo for Regional News Site
MX$ 5.699
Regional News Website
214
entries
62
designers
Coalition for Sustainable Jobs - support the environment and create jobs!
US$ 429
We work to address the climate emergency, protect our future by seeking legislation that supports a transition to a clea
58
entries
24
designers
Logo for email newsletter
299 US$
Daily newsletter, US audience, stories about politics and religious liberty.
4
entries
4
diseñadores
Logo: Get out the vote in 2020 to defeat Trump!
$ 299
This is a political action committee (PAC) working to get out the vote in the 2020 presidential election. We are primari
79
entries
24
Designer
Maggiori informazioni sul design di logo e social media
Scopri come funziona